Frank Lloyd Wright and the Penfields

Anyone Over Six Feet Tall is a Weed 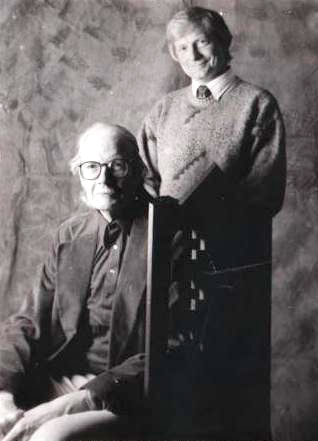 The family legend goes like this: in 1952 Louis and Pauline Penfield visited Frank Lloyd Wright’s studio in Wisconsin. They were being given a tour of the drafting room by Eugene Masselink, Wright’s secretary, when Wright himself suddenly appeared. "Eugene, we’ve got to go to Spring Green right now!" Louis Penfield stepped forward with a challenge. "Mr. Wright, could you design a house for someone as tall as me?" Wright looked at him for a moment. "Go stand under that beam," he said. Louis did as he was told. After a pause, Wright said: "That beam’s six foot nine inches high, so you’re six foot eight. Anyone that tall is a weed. We’ll have to build a machine to tip you sideways!" With that, he turned and left. Six months later "the weed" received Wright’s preliminary drawing in a mailing tube containing a colored-pencil rendering of a house with a high ceiling, narrow stairs with wide steps and –unusually for Wright—16 thin ribbon windows which deliberately accentuated Louis’s physique. This was how Wright worked, without a contract, without a fixed schedule, with only the client and the land itself in mind. Each house he designed was unique to each circumstance. The Penfield house is no exception.Built in 1955, the Penfield house sits on a rise overlooking the Chagrin river. Back then the home site was farmland with wheat fields and river bluffs in the distance. Wright took advantage of this and faced the house toward the view. Since then the trees have reclaimed the land, bringing forth a crop of Black Cherry hardwood which was used to renovate the furniture and cabinetry in 2002. The long kitchen counter top was milled from a Black Cherry toppled in a storm less than fifty yards from the house. Using material provided by the land furthers Wright’s vision of organic architecture so central to his Usonian dream. 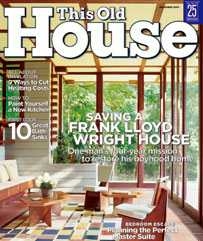 Click to read Paul's article about
restoring his family's home