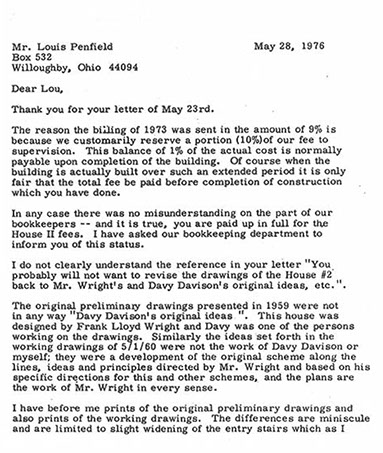 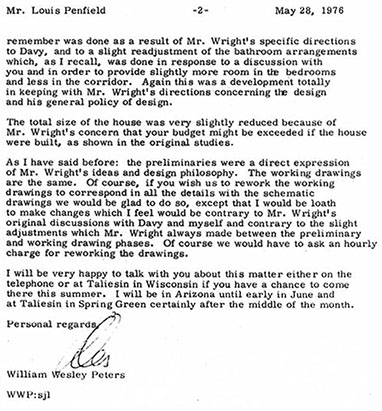 The vacant lot is 10.67 acres in size and is the building site for RiverRock, Wright’s last Usonian house. The lot is wooded and sits high on a hill overlooking the Chagrin River. It is the last existing original site left for a Wright design. All others were sold.

In 1957 the Penfields commissioned a second house from Mr. Wright to be built several hundred feet south of the first home. Although, the 92 year old Wright had by then stopped designing residences, and told the Penfield’s he had enough work to last "the rest of his life", he replied that because Lou was a former client, he was "in under the wire". Topographical maps and preliminary site plans were prepared and sent off to Taliesin West.

Frank Lloyd Wright died in April of 1959. The family assumed the second design died with him, but to their astonishment; the week of Mr. Wright’s funeral a mailing tube arrived from Taliesin containing a drawing of the second house. It had been on the drawing board when Wright died.

It is designated Project #5909 in the Taliesin Archives and is, quite literally, Frank Lloyd Wright’s last residential commission. Correspondence between the Penfield’s and Taliesin indicates that the house is authentic in every way and the work of Mr. Wright in every sense.

Although Wright left behind many unbuilt projects when he died, this is the only one that still has its original building site available. To understand how important that is, Wright oriented the design around a specific poplar tree. That tree was marked at the time and still stands today. The architect’s fees were paid, the blueprints drawn up, the site cleared and now the project is ready to begin.