After Wright’s death, the Taliesin archives listed all of Wright’s works in the sequence in which he created them. The numbering system works like this: the first two digits represent the year the house was designed. The next two digits show the sequence of that design within that year. Thus, the first Penfield House has the index number 5303, meaning it was the third house to be designed in 1953. Looking at the index number for the second design, which Wright called the "river rock house "after the stonework from which it was to be built, we find the number 5909, indicating it was the ninth house he designed in 1959. Project 5910 is a garden wall he designed for his wife, Olgivanna. The sequence of numbers then ends with 5911 the Grady Gammage auditorium for Arizona State University. Here the numbers end. This leaves Project 5909, the second Penfield house, as Wright’s last residential commission.

When Wright died unexpectedly on April 9, 1959, his coffin was taken to Wisconsin for his funeral on Sunday. On Monday the leaders of Taliesin re-convened in Scottsdale. With its founder and guiding light now gone, the cash-strapped Fellowship mailed off those drawings which had been completed, along with an invoice. Project 5909 was mailed that Wednesday, on April 15, 1959, and arrived two days later, within a week of Wright’s funeral. It was his last residential commission. It was on the drawing board when he died. 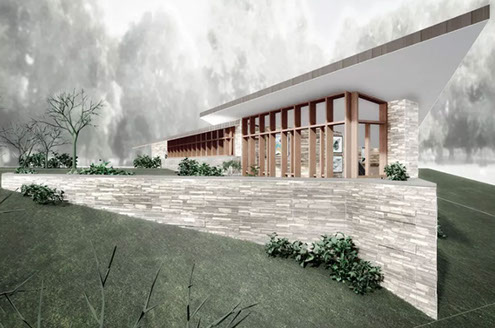 Click Image to take an interactive tour of RiverRock

But it didn’t end there. After Wright’s death most of Taliesin’s clients canceled their projects. Louis Penfield didn’t. He hired Wes Peters to finish the blue prints, then paid the Foundation’s architectural fee (the canceled checks are in safekeeping). For several years thereafter he gathered stone from the Chagrin River. But life gets in the way, as life has a way of doing, and he only got as far as building a few feet of one wall for a documentary film he was creating.

There the matter stands. The last original lot for a Wright house remains vacant, with the poplar tree Wright himself designated as the natural feature around which the house was to be oriented still standing guard. It is the only un-built Wright Project for which the client-architect relationship is both proven and paid for, along with the very land upon which it was meant to stand. Taken together, this puts the project’s authenticity beyond dispute. 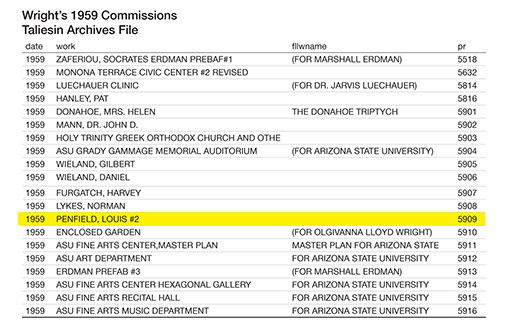